Home > About Us > Overview

Edgewood Village is committed to promoting a working, affordable and diverse neighborhood in partnership with the greater community.

"Edgewood Village is more than a place to live. It offers opportunity for family growth, neighborhood support and community partnerships. It is the beginning of a bright future, rich with possibilities. This opportunity was made possible through the partnership of the Akron Metropolitan Housing Authority, the Department of Housing and Urban Development, the City of Akron, the Ohio Housing Finance Agency, the Ohio Capital Corporation for Housing and many other private and non-profit organizations."

Edgewood Village is a supportive, family-focused environment. It provides Akron with a vibrant, revitalized and thriving gateway neighborhood that enhances the accessibility to community services and amenities.

Offering 1- to 4-bedroom rentals, the award-winning Edgewood Village is designed with spacious floor plans and architectural details that bring families and the community together. The senior building offers innovative adaptable and accessible design. Senior apartments allow tenants to "age in place" even as their sensory and mobility needs change.

Edgewood Village features an amazing array of education, entertainment and services within a 1.5-mile radius. A few of the highlights are listed below. Please see Neighborhood Amenities for an extensive list.

Inspired by Akron and Dedicated to Preserving Its History 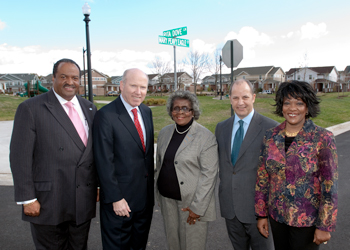 Mary Peavy Eagle Court. Eagle, an activist and community leader, was the first African-American PTA president in Summit County, founder of the Akron Negro Council and a charter member of the Ohio Community Chest, now the United Way. She was instrumental in seeing that the first black teachers were hired in Akron and was active in the NAACP and the Democratic Party. She was also the first African-American woman to run for state representative and for Akron City Council in the 1940s.

At the street dedication ceremony in October 2010, Eagle's daughter, Grace Richardson, said it was wonderful that her mother was being honored: "Mother wanted Akron to be a great place to live, and I think her dedication to bettering the lives of its citizens certainly shows that Akron is a great city with great people. I want to thank AMHA for this tribute to her memory and dedication."

Rita Dove Lane. Dove, a Buchtel High graduate and daughter of the first African-American research chemist at Goodyear Tire and Rubber Co., received a Pulitzer Prize in 1987 for her third book, Thomas and Beulah, a collection of poems based on the lives of her grandparents in Akron. Rita Dove also served as Poet Laureate of the United States and Consultant to the Library of Congress from 1993 to 1995.

"I can't tell you how much of an honor it is to stand here before you and to tell you that I am touched would not be enough to tell you how deep the feelings are," Dove said at the dedication ceremony. "I spent my early childhood quite close to this new complex, on Monroe Street, between Edgewood and Rhodes Avenue. The 5-year-old who played along those tree-lined brick roadways could have never imagined that in the future one of those street signs would bear her name." She continued, "For me, this is like coming home."

Marian T. Hall Building. The mid-rise building at the corner of Vernon Odom and Edgewood Village Boulevards provides a much needed specialized living environment with its innovative senior apartments. The first floor welcomes the Edgewood community with onsite management and resident services, a computer lab, and community and meeting rooms. The building also sits on the site of the original Edgewood Homes community building dedicated to Marian T. Hall, and AMHA is pleased to continue the dedication by naming the new building after Hall.

Through her personal experience, Hall learned the pain and stigma associated with being poor, and this experience led her to champion the needs of the poor. As an activist, Hall organized funding and better treatment of those caught in the welfare cycle. She was the founder and president of the Summit County Committee for Adequate Welfare and Welfare Rights Organization and the State of Ohio Welfare Rights Organization. As a community leader, Hall also sat on the board of the Akron Urban League, the Mayor's Human and Community Relations Commission, and was the past president of the Summit County Human Services Committee.

Her motto and life dedication: Everyone should be treated with respect, regardless of their position in life.